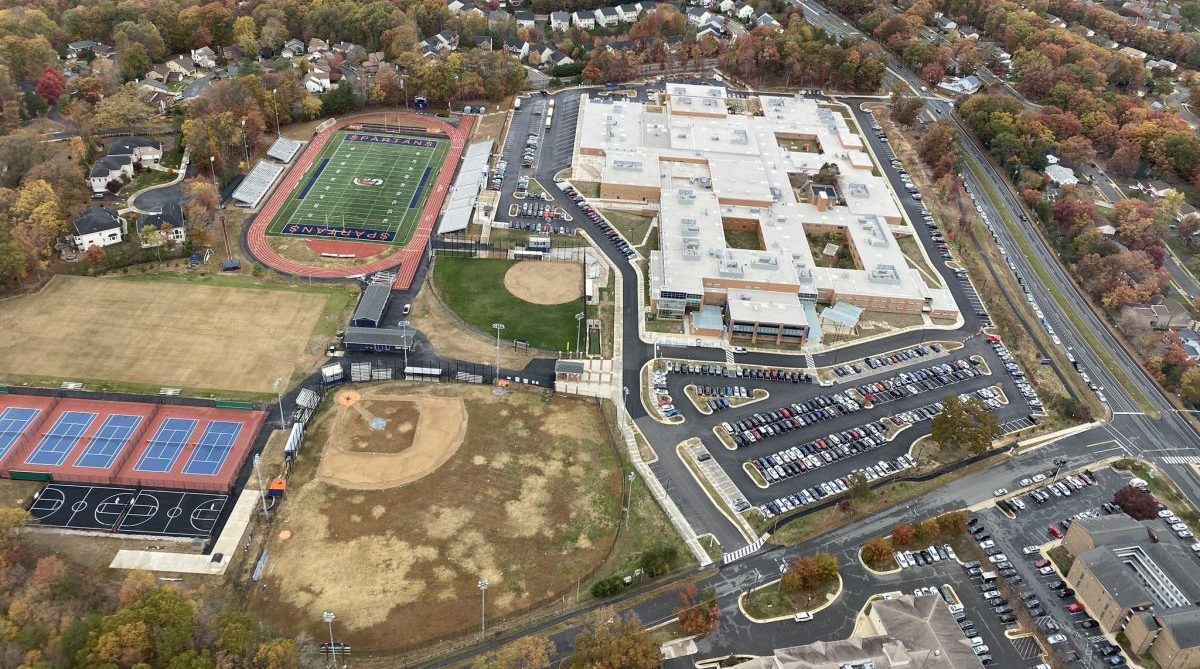 At a glance: West Springfield High School (WSHS) is located on a 39.00-acre parcel in Springfield and was originally constructed in 1966. A total of 105,304 square feet of floor area was added to the existing 281,446-square-foot building.

The design for this facility included: utility layout, site grading, parking layout, and athletic field layout/reconfiguration. BMP/SWM was met through a combination of Low Impact Development (LID) Practices including conservation areas, pervious pavers, pervious asphalt and filterra units. Some of the features that were added are sports field entry plaza, concession, ticket booths, and pervious asphalts basketball courts. In addition, landscaping and zoning requirements also had to be met. A request for modification of transitional screening requirements were prepared and submitted to Fairfax County. Traffic movement through the site was improved with the design of a bus road and a significant improvement to the kiss-and-ride loop. Cars used to stack out onto Rolling Road, but a relocation of the drop off point and an expansion of the drive aisle itself helped to minimize that problem. The southern parking lot was redesigned to allow for a bus loading area to be relocated behind the school. Numerous on-site trails and sidewalks were upgraded and redesigned to ensure compliance with the Americans with Disabilities Act. One of the major concerns for FCPS was the major shortage of parking on-site, numerous vehicles were forced to park along Rolling Road, which proved to be very dangerous. The site had only 558 parking spaces for an enrollment of 2,100 students, and many of these spaces were inaccessible or blocked by modular classrooms. To provide some parking relief, the tennis courts were relocated to where a grassed practice field was located, and a grassed practice field was rotated, allowing 72 additional parking spaces. This project is currently under construction. As part of this project’s construction administration tasks, we answered RFIs, reviewed PCOs, and issued supplemental information, when necessary. This project is currently under construction, but all permits were pulled in time for construction to begin as scheduled by FCPS.